My name is Alessandro, a master student from Wageningen University. I joined this research cruise last Sunday, in Aberdeen. The aim of my MSc project is real-time fish species and size specific discrimination using acoustic backscattering data, which can be quite challenging among species that show similar acoustic responses. In this respect, the new broadband echosounder EK80 uncovers new possibilities, as we become able to study the fish school’s frequency response (intensity of sound reflected at different frequencies) over the complete spectrum 17-460 kHz. To do so, we need clear and consistent data in order to calibrate and validate an identification algorithm in the next months.


When passing through several fish schools and observing a pure catch of a certain species in the net, it is quite reasonable to think that all the aggregations seen on the screen belong to the very one species. Likewise, it can happen to observe a broad variety of species within the same catch, as it happened on Tuesday, July 6th fishing on several schools around 52 12 N; 00 34 W (Haul 9).

The catch consisted of mixed Norway Pout, Mackerel, Haddock, Whiting, Grey Gurnard, and Herring, for a total of about one tonne.

In these circumstances it becomes quite hard to successfully distinguish the different caught species on the echogram!

Thanks to the trawl camera we can attempt to track the history of the fishing session, connecting each school on the echogram to the related species observed with the camera.


However, for the best performance in species identification we hope for pure catches in the next days. Especially Norway Pout and Herring will be targeted, since it appears to be quite difficult to distinguish them acoustically.


In the meanwhile, I’m helping HendrikJan in sampling catches, taking measurements and collecting otoliths for the Herring survey, to get a more complete insight of the life on a research vessel! 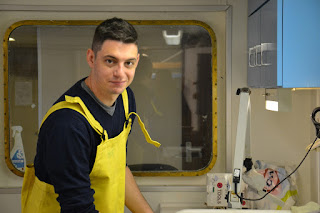 Posted by herringsurvey at 08:58 No comments:

One of the advantages of working on a governmental vessel is that you have to spend the weekend in port. Of course it is not very efficient for the execution of the survey, but since you find yourselves a foreign port, you may as well just enjoy your time!
A great way to spend you time is let the local people taste "Maatjesharing" (Dutch, slightly salted and fermented herring) and convince them that is edible and tasty.
This weekend in Aberdeen, on Sunday evening, our team visited Fiona, Berta and Katherine (just back from a day of Munro bagging) and presented to them a portion of homemade Maatjesherring.

Conclusion: Berta and Fiona seemed to enjoy eating Maatjesherring. Katherine still has to become used to the idea of eating (almost) raw herring. May be next year?
We left a portion for Fiona for a tasting session in the Marine Lab in Aberdeen.
Happy, to have found ourselves new ambassadors of Dutch marine quisine, we walked back to Tridens where we welcomed Alessandro, student from Wageningen University, who will join us next week and will contribute to this blog.


Posted by herringsurvey at 09:30 No comments:

While on the 4th transect covering our survey area on the way south, we were approaching the north-eastern Scottish coast. Some small schools appeared along the seabed and we took the chance to take another trawl sample.
These catches are not only used to identify our acoustic estimates of fish-density-per-sea-surface-area, but also to get an idea of the population structure: what is the abundance per age and length; how much do they weigh; what proportions are male/female; and at what maturity stage are they. 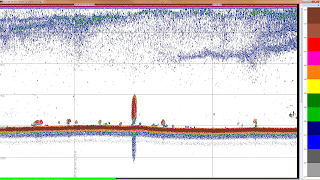 Soon after the trawl sonar indicated that the school entered the net:
The camera footage collected later on also showed the moment the herring went through the net: 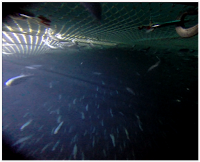 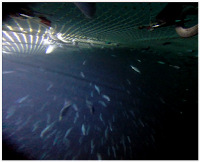 From the multibeam echosounder data, we could recreate the shape of the school in 3D: 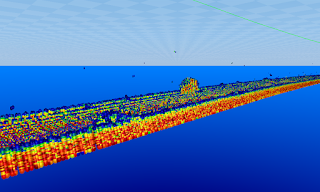 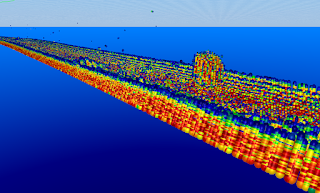 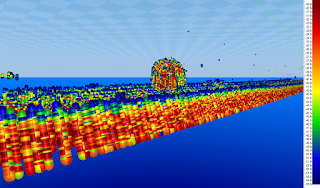 Soon after that, the net was hauled on board: 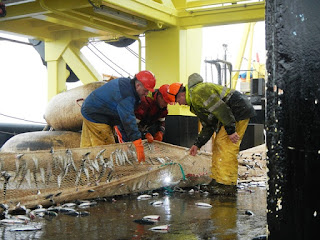 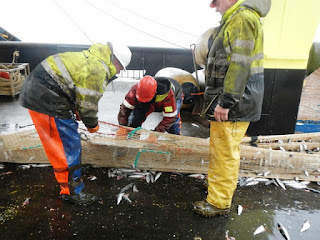 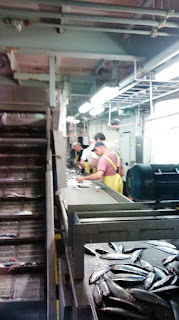 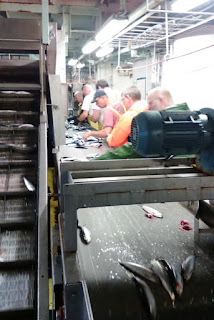 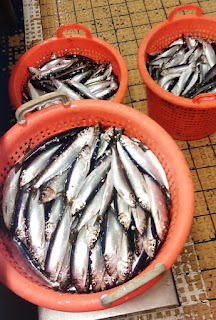 The combination of the different data sources will allow us to recreate the size, volume and fish abundance of the sampled school. These results can then be compared to the acoustic biomass estimate! But that's for later...
Only a few more miles to go to the end of the transect. In the coming week we will continue with the next part of the survey, which includes the Devil's Holes, an area a bit further south where bigger herring aggregations can be expected.
Posted by herringsurvey at 23:38 No comments:

Yesterday towards the evening whilst approaching Moray Firth we shot the net on some marks along the seabed. The haul contained young herring (around 18 cm mean length) and sprat (mean 11 cm).

﻿The multibeam echosounder is running throughout the survey and also during trawling, so we collected data on the schools we targeted. Lining up the multibeam data creates 3D images of the fish schools. Below are several examples of these viewed from different angles.

From the combination of the single beam EK60 and the multibeam ME70 we expect to improve school identification. It allows us to characterise the school shape which may be different for different species. The crew on board the Tridens also use the information during catch operations to steer the net towards the schools.

Posted by herringsurvey at 20:41 No comments: